I recently through a baby shower for our good friends Ruth and Austin.  Once again, I decided to throw a co-ed shower (read about “Ahoy It’s a Boy!” shower here)  because it’s just what fits our group of friends.  I love how relaxed a co-ed shower is.  Since it was summer (and really, really hot out here in the desert) why not have a good ole’ fashion barbecue?  Since I was at the height of my morning sickness (read about my pregnancy here) this shower was perfect because it was so simple…and it didn’t hurt to have some help from my friends!

Here’s how I decorated the kitchen island.

My amazing friend Val bought pre-made cardboard letters of the baby’s initials from Joann’s Fabrics, spray painted them and added ribbon. I thought they were the perfect center piece.   I also love using decorations that the couple can use in the baby’s room! 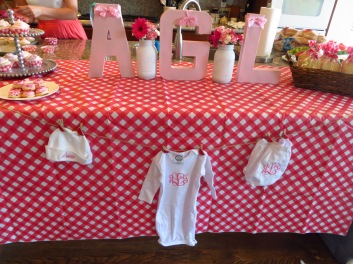 In between the letters, Val also bought mason jars, spray painted them and filled them with flowers.  I should have known she was the perfect gal for the job.  She is fashion designer and so creative, just check out her Etsy Shop!

Also on the island, I bought a monogrammed layette and hung them up with watermelon clothespins (From Michaels) on a piece of twine.

My friend Rachelle made the cupcakes, topped with watermelon toppers from Michaels. 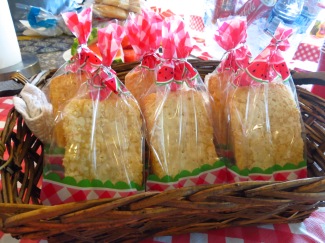 And for the favor, I made mini-pound cakes and put them in these watermelon favor bags from Michaels. 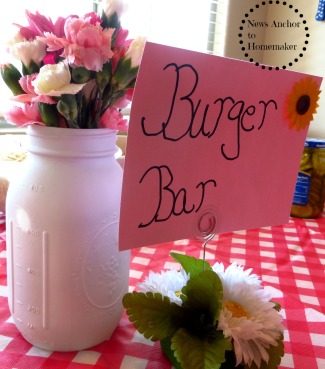 I dressed it up burgers and dogs with a bit of cuteness by making it a “Burger Bar”. There was a Mexican Station, (To top your burger with guacamole, sour cream and salsa) A BBQ station and an American Station. The cards are Scrapbook Paper from Michaels with Martha Stewart Sunflower Scrap Book Stickers. 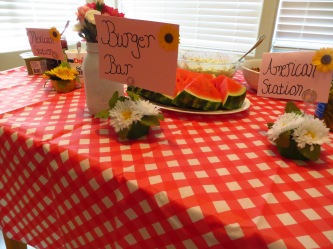 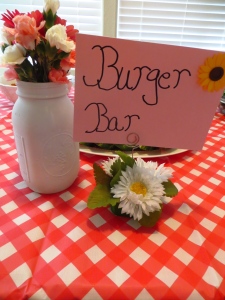 For the Drink Station: 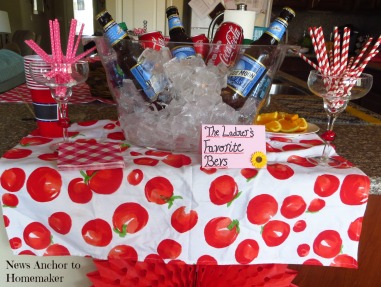 I kept it simple…it was a bbq after all.  Just Blue Moon and Coke (Austin and Ruth’s Favorites.)  I already had the strawberry margarita glasses and filled them with cute paper straws from Michaels and Target.  Of Course we had to have Red Solo cups to top it off. 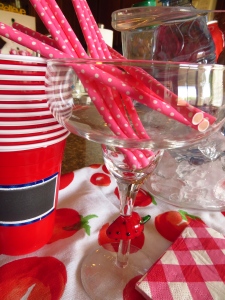 Val made more of these gorgeous mason jar center pieces. I used another picnic table cloth from Michaels. The napkins are also from Michaels.  I would have preferred to have this party outside, but it was 104 degrees!